The Kairos Adventure – What I Learned From My Dog About Loving My Neighbor!- Chapter 12

WHAT I LEARNED FROM MY DOG ABOUT LOVING MY NEIGHBOR!

“I’ve had the honor of fulfilling the greatest commandment.”

Hearing that Jesus had silenced the Sadducees, the Pharisees got together. One of them, an expert in the law, tested him with this question:

The teacher that asked Jesus which is the greatest commandment, didn’t expect Jesus’s response, because it was his intent to test Jesus. But Jesus points out that all the law and the prophets hang on these two commandments. Jesus’s response silenced those who were trying to trap Him. His critics did not have a comeback. It is hard for us in the Church to imagine that everything we do is boiled down to these two commands. We often are looking for something new to do…a new strategy, a new method, a new program, a new seminar covering the next life changing antidote, but Jesus clearly states that these two commandments are it. We don’t need to look any further. Once a disciple of Jesus’s eyes are open to this life giving truth they pursue it with all their hearts, because this is what Jesus gave His life to while He was here on earth. Sometimes we need a friend to help us understand this truth as Shah did in his story.

I never wanted a dog.

Growing up, my kids used to beg me to get them a pet, but I always said, “NO!” for two reasons.

However, this all ended with my son’s decision.

A few months before getting married, Todd decided to get a dog, which he couldn’t keep after moving into his new home. So, by default, Karen and I became the proud owner of a six-month-old highly active chocolate lab named Cocoa.

From day one, it was obvious that Cocoa was a people’s dog. She disliked other dogs with a passion but loved people with the same intensity. What she loved even greater than people though was chasing and fetching a little red Kong ball that we had to throw for her a good 3-5 times a day for at least 10 – 30 minutes. 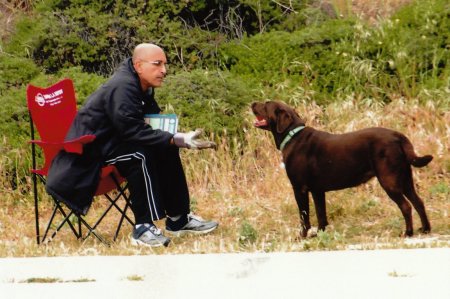 Once I lost my job, our morning routine became going across the street and me reading a book while throwing the ball for Cocoa to fetch. It was then that, while doing the routine, I decided to wave at anyone who drove by. This was my first step towards getting to know my neighbors.

It was sad and unfortunate that after living in my neighborhood for 14 years, I knew very few of my neighbors, but Cocoa changed all that. Because of that simple act of waving at strangers, little by little I got to know everyone on my block. Some I got to know because they were happy to be recognized and respected by a simple wave or a nod. On several occasions, drivers would pull over just to say something like, “Sir, you’ve been waving at me for the last two years, so I thought it’s about time I introduce myself to you.” But others I got to know because they were intrigued by Cocoa’s ability to fetch the ball. In any case, because of Cocoa, in a couple of years, I achieved what I hadn’t done in 14 prior years, getting to know almost everyone on my block by name. All the neighbors and their children knew Cocoa by name even when they couldn’t remember mine. They referred to me as Cocoa’s dad. But there was more.

Once the house across the street was sold to a new owner, he put up a fence around the house. The new fence prevented Cocoa and me from continuing with our daily routine. So, we moved to the park a half a mile away from our house. In the park, I had to use a plastic arm to catapult the famous red ball even farther and for Cocoa to work even harder. But even more delightful for me was getting to meet more of my neighbors.

Even my wife, Karen, who only took Cocoa for a walk on weekends has come to know many of the neighbors. It wasn’t unusual for them to walk up to Karen, scream, “Cocoa!”, ask where I was and introduce themselves to Karen.

In the last 12 years, Cocoa has seen me through a lot of pain. She saw me through the devastating experience of losing a job I loved, my cancer, our children’s hardships, our daughter’s near death car accident, the death of my dad and both my in-laws just to name a few, but through it all, her faithfulness has been impeccable. My prayer is that I could be half as faithful to my loved ones as she’s been to me. 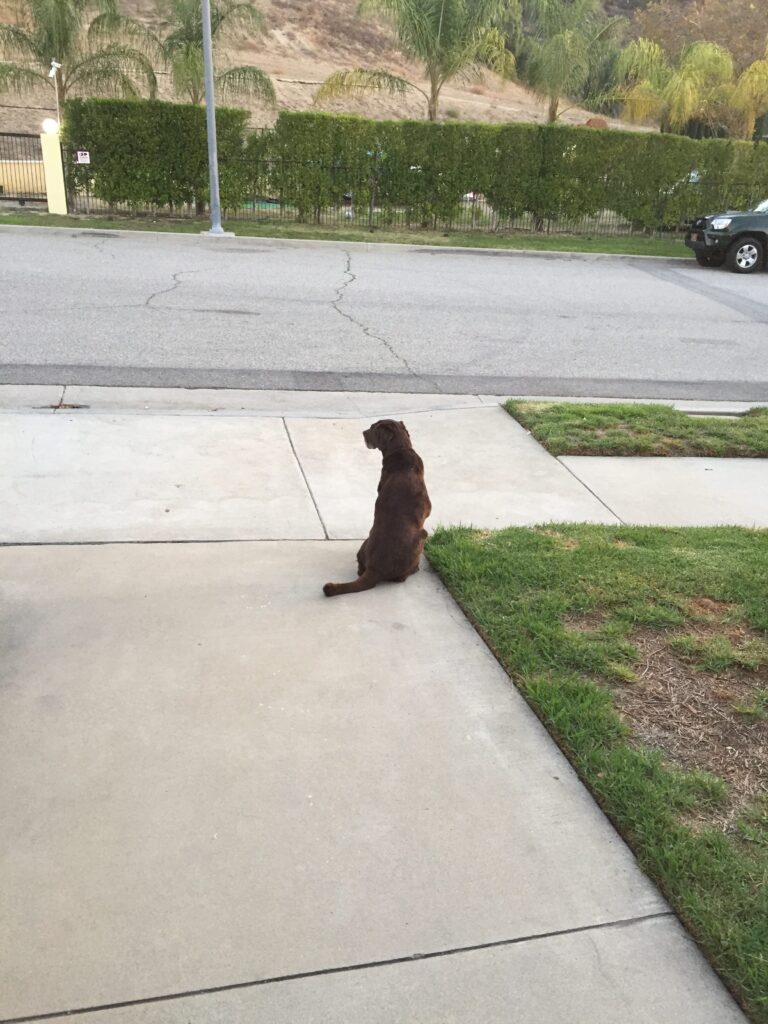 Because of Cocoa, I’ve had the honor of fulfilling the greatest commandment Christ has given us, loving my neighbors as myself. I’ve had the privilege of sharing the Gospel and praying with my neighbors in a very natural and simple way that started by me recognizing them as human beings who deserved to be waived at. But things have changed.

Over a month ago, Cocoa was diagnosed with heart and lung cancer. 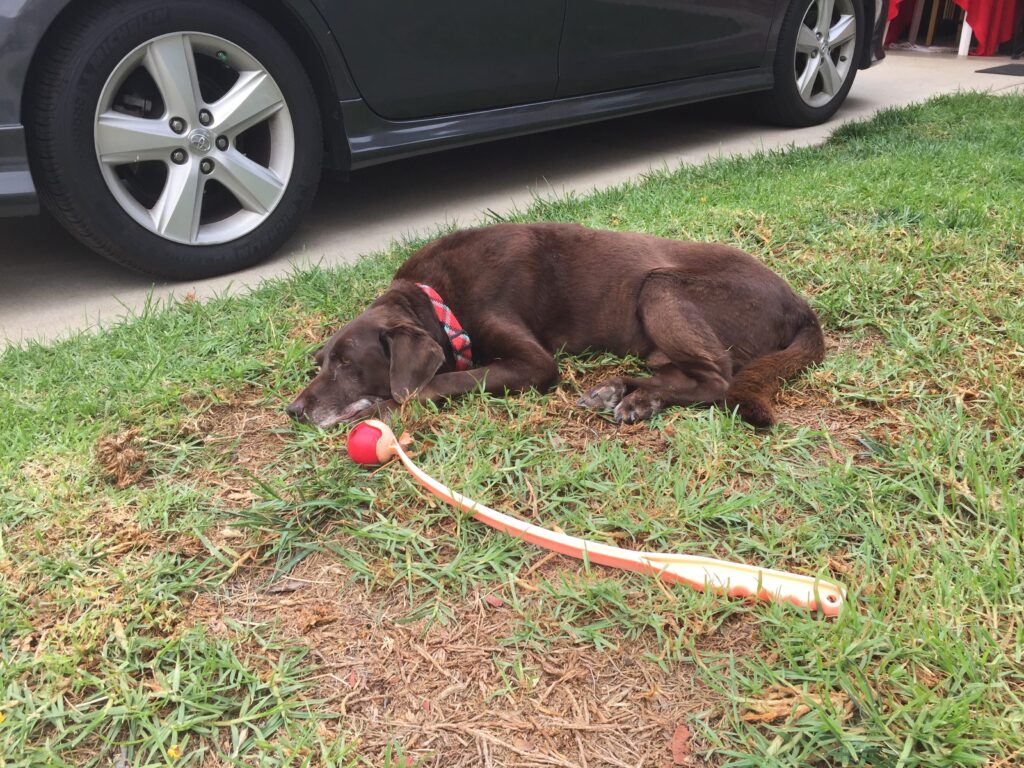 These days she doesn’t chase her ball anymore. Almost every day, she lies on the front lawn (sometimes for 10-12 hours) and sleeps. These days, my office is in our garage where I sit and watch my best friend, Cocoa, nearing her end while I still wave at all who drive by.

A time for reflection:

Shah honestly and humbly shares how long it took him to begin to love his neighbors. I think many of us, if we were honest like Shah, would have to admit that we have overlooked being obedient the Lord’s greatest commandment. We might respond with, “I love God!” But what about the second part of the great commandment?  It was very moving that God used Cocoa to nudge him in to loving his actual neighbors and it all started with waving to his neighbors. Who or what is God using in your life to nudge you toward loving your actual neighbors? What would it take to begin to wave at your neighbors and even start up a conversation? Is the Lord speaking to you about this very thing? Remember the significance of instant obedience.