Neighbors and Living the “Abnormal” Life 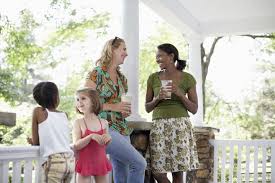 The greatest threat I have found to my ability to demonstrate love for my neighbors is a very busy schedule. One summer day, I came home from the office and said, “Jo, we need to say no to so many activities in our home.” I had been so overwhelmed by the many things going on, from exchange students staying with us to an assortment of people coming and going, that I thought closing our doors was the best solution. It’s not that these experiences weren’t valuable. But those activities did not develop lasting relationships. If I had my way, I would love to spend my entire week with neighbors and family. This is my greatest passion as far as relationships, but time doesn’t allow for it. So when I told Jo that I was done with so many outside activities, she responded, “I said yes to a baby shower here.” “Whose baby shower?” I said. “Marcy’s,” she answered. “Marcy Who?” I asked. And Jo said, “Our neighbor.” I stopped, completely speechless. That was exactly the kind of thing I’d been yearning for — activities that would allow me to practice neighborly love!

In retrospect, I did have too much going on. Being mindful about my time and energy is important, and it’s imperative to listen to the Spirit so we are not so full of activity that we miss the golden opportunities He is preparing for us.

Sixteen women, many who lived in our neighborhood, showed up for that shower. And just a few weeks after the baby shower, we hosted a Christmas dinner for our small church group. As people were arriving, I noticed that Jo was at the front door talking with Marcy.
Marcy’s car had been broken into near her kids’ school and her purse and a great deal of cash had been taken. She had to freeze her accounts at the bank, leaving her no easy access to emergency funds. Her husband was out of town on business and wouldn’t be back until the following day. Here she was, just before Christmas, 38 weeks pregnant, and home alone with two young children. She was deeply concerned that whomever broke into her car, knowing that she had this amount of cash, would now be coming into our neighborhood, and she came to warn us. She was visibly shaken from the break-in and Jo asked if it would be okay if she prayed for her. Marcy agreed and Jo put her hands on her shoulders and prayed. As Jo was praying, the Lord told me, in a way that only He can communicate, “Give her $200.”

After everyone had left our dinner party, Jo came up to me and said, “How much are we going to give Marcy?” I immediately responded, “The Lord told me $200.” I had been to the ATM the day before and there was $200 in my wallet. I asked Jo to get a Christmas card ready and said I would go and see if Marcy was still awake. I took her the card with the gift inside.

The next day at the office, I got a call from Marcy. She thought I had given her just a Christmas card and she put it on her nightstand with all the others. She woke the next morning and decided to read all of her Christmas cards, hoping to cheer herself up. After opening our card, she called in great surprise and said, “I will pay you back!” I said, “No, Marcy, that’s a gift from God for you.” Her response was priceless: “That’s not normal!” I love not being normal.

When I spoke to Marcy’s husband the following week, he told me that when Marcy told him about the gift he “almost cried.” I don’t know how this all affected this couple in their relationship with God, but God knows their hearts and He is the One who will use this act of compassion to show them there is a God who loves them and cares deeply about what they are going through.

– Lynn Cory
Author of Neighborhood Initiative and the Love of God