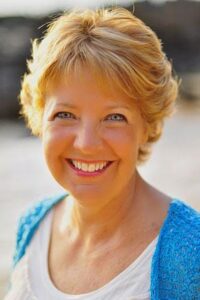 I had a moment in my life, as we all do, when a bit of eternal truth broke through my “convenient Christianity,” and I was radically changed.

We lived in a small university town where God opened up many opportunities for ministry.  My husband was working as a youth pastor.  We had teenagers over to our house all the time and even had a college student living with us.  I accepted a part-time position as what they called a “radio personality” at a Christian station in town.  I was busy writing a series of teen novels for a Christian publisher, and women’s groups were calling asking me to speak at various events.  In every way, I was Ministry Woman!

One night I was on the phone with my best friend, Donna.  In three weeks she and I were flying to Europe where I’d been invited to speak.  There was so much to do, and I told Donna, “If one more person asks for one more little piece of me, I’m going to fall apart!  I have no more pieces left to give.”

As I was speaking to her, the call waiting signal on my phone started beeping.  I ignored it but the caller continued to dial in.  “Just a minute, Donna.”

It was almost ten o’clock, and the caller turned out to be my neighbor, Jana.  She said, “Robin, I didn’t know who else to call…could you come up?  Just for a minute?”

I thought, Okay.  This is it.  The last piece of my sanity and now my neighbor wants to take it from me.  Doesn’t it ever let up?”

I considered saying no.  I thought she would certainly understand if I said it was too late.  I would come see her in the morning.  Whatever it was could wait until then, couldn’t it?

I told Donna I’d have to call her back, and I jerked the front door open ready to march up the street to Jana’s house.

It was a crisp cold night.  It had been snowing.  That, and the fact that I walked out without a jacket made me feel even more inconvenienced.  I couldn’t imagine what Jana wanted.  I’d given her all my books, but she hadn’t read them.  I told her when my radio program aired, but she never listened.  I’d given her two books by important Christian psychologists when her husband left her, but she hadn’t gotten around to reading them.  The way I saw it, I’d done my part.  Jana simply wasn’t interested in coming to the Lord.

When I arrived at her front door, Jana stood there on crutches.  I’d forgotten that she told me a week ago that she was having her right hip replaced.  She had now had both hips replaced before she was forty-five due to arthritis.  I knew her mom had come from the East Coast the first few days to help out.  Her ex-husband had their two daughters every Thursday, and this was Thursday.  Her mom had gone home, and Jana stood before me, all alone.

“Thanks so much for coming,” Jana said showing me in and hobbling to the hospital bed set up in the family room.  “I didn’t know who else to call.  You see, I wanted to go to bed, but…” she looked down at her feet.  I couldn’t take off my shoes.”

In that moment, I realized that I thought I was “ministry woman,” and yet I was not worthy to untie the laces on my neighbor’s tennis shoes.

I knelt down, and let me tell you, it was all I could do to not wash her feet with my tears.  I saw what God desired of my life.  I suddenly understood His concept of ministry.  All God has asked me to do is love Him and love my neighbor.

That’s what a real ministry woman does.

I untied Jana’s shoes and slipped them off her feet.  Then I helped her take off her sweat pants.  I saw the scar.  It was vile.  So much pain, I thought.  And no one here to comfort you.

Jana slid into bed but I didn’t want to leave just because my task was done.  I pulled the comforter up to her chin and asked if she’d like a cup of cold water.

I brought one for her.  In Jesus’ name, I thought, as she sipped from the glass tumbler.

Then before I could be self-conscious about what she might think of me, I kissed her on the cheek and said, “Good night, Jana.  I love you.”

A year and a half later, Jana gave her life to the Lord.  We had moved to another state when she told me her good news on the phone.  She was excited about plans to go on the woman’s retreat and the weekly Bible study group at the church she was attending.

More than once I have wondered what would have happened if I had said no on that snowy night.  After all, I had books to write, planes to catch, and a radio show to record in the morning.  What if I had missed the opportunity for the pure and undefiled ministry of loving my neighbor simply because I was too caught up in my own version of being Ministry Woman?

Why not partner with Neighborhood Initiative?